Gertie was a cool and foxy female Dakotaraptor who was part of an extended family of Dakotaraptors and the herd. She was the oldest out of her and her brother. Gertie loves her dad and is eager to prove herself useful in the family's mission to rid the world of Buck, despite her brother pointing out that Gavin's plan is missing a few feathers. 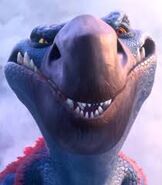 Gertie was hatched to Gavin and Gavin's Wife, being the oldest out of two eggs.

Revenge on the Weasel

Gertie, her father, Gavin, and her brother, Roger, all make a living out of stealing other dinosaur eggs. One day, Gertie snatched a Triceratops egg from a Mother Triceratops. They noticed that Buck, a Weasel, was taking a shower near by and noticed this. He threw gases in Gavin and Gertie's faces, and stole the egg from Roger. Gertie, attempting to eat him, ran into a rock wall. She later tried to snatch the egg from Buck, but missed. In the end, the raptors were buried under a bunch of rocks in a landslide, but survived. Only when they emerged from the rubble did they discover that Buck returned the egg to the mother and escape. He ended up escaping the Dinosaur World and made it out of the underground. Buck reunited with his old herd and told them of a Stone Tablet and an asteroid coming. But the dino-birds eavesdropped on the conversation. Gertie was the first to emerge, roaring, saying that the weasel would need to eyepatches when she was finished with him, but Gavin discussed a plan that was a little less violent. Their plan was to "stop the weasel and his friends from diverting the asteroid", while they glided safety over the destruction and everyone else dies, commenting it as their paradise. Roger pointed out it was possible, but "highly implausible, based on a scientific standpoint" and Gavin and Gertie growled at him. Roger, frightened and disappointed, remarked it was a great plan. Roger spotted the herd with his amazing eyesight he got from their mother, and they began their journey. They chased them into a forest and stopped (possibly because they wouldn't have enough space to fly). They flew over head and were shocked by an electrical storm, caused by the two possums' friction.

Later, Gavin gave a job to Roger. It was to kidnap Buck. Gavin was overjoyed when Roger did it, only to find out he accidentally kidnapped a ground sloth named Granny. Granny mistook Gertie for an angel, and began climbing on her. Gertie screamed and Gavin sent Roger to help his sister. Granny was attacking Roger and Gavin ate Granny. Granny was trying to get out of Gavin's stomach. Gertie, thinking quick, helped her father cough up Granny. Later, Gertie knocked a Geotopian crystal over a bridge and they pinned Buck down. Roger pointed out that they should work together and Gertie said he was right. They agreed to survive and flew the crystal into the volcano. It threw the asteroid elsewhere.

Gertie was strong, independent, and cool dino-bird who enjoys helping her family. Unlike her brother, Roger Gertie is ferocious, eager to get revenge on Buck for causing her family trouble; something her father praises her for. Like her father, she sees Roger as almost completely useless and constantly picks on him. Nevertheless, Gertie does see a certain degree of importance in her brother as his incredible eyesight comes in handy. Gertie has blue scales, a white underbelly and red feathers. She has orange eyes and a black beak. She is a very fat Dino-Bird who picks on her brother.

Retrieved from "https://parody.fandom.com/wiki/Gertie?oldid=1812962"
Community content is available under CC-BY-SA unless otherwise noted.