In folklore, giants (from Ancient Greek: gigas, cognate giga-) are beings of human-like appearance, but are at times prodigious in size and strength or bear an otherwise notable appearance. The word giant is first attested in 1297 from Robert of Gloucester's chronicle. It is derived from the Gigantes (Greek: Γίγαντες) of Greek mythology. Fairy tales such as Jack the Giant Killer have formed the modern perception of giants as stupid and violent monsters, sometimes said to eat humans, while other giants tend to eat the livestock. The antagonist in Jack and the Beanstalk is often described as a giant. In some more recent portrayals, like those of Jonathan Swift and Roald Dahl, some giants are both intelligent and friendly. 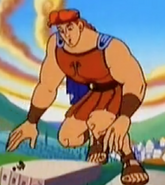