The giant bison (Bos latifrons), also known as the long-horned bison, is an extinct species of bison that lived in North America during the Pleistocene epoch. B. latifrons thrived in North America for approximately 200,000 years, but became extinct some 20,000–30,000 years ago, at the beginning of the Last Glacial Maximum. B. latifrons is thought to have evolved in midcontinent North America from Bison priscus, another prehistoric species of bison which migrated across the Bering land bridge between 240,000–220,000 years ago. The giant bison was one of many species of North American megafauna which became extinct during the transition from the Pleistocene to the Holocene epoch (an event referred to as the Quaternary extinction event). It is thought to have disappeared some 21,000–30,000 years ago, during the late Wisconsin glaciation. The species was replaced by the smaller Bison antiquus, which in turn evolved into the yet smaller Bison — the modern American bison — some 10,000 years ago. 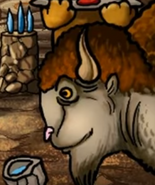