The giant forest hog (Hylochoerus meinertzhageni), the only member of its genus, is native to wooded habitats in Africa and generally is considered the largest wild member of the pig family, Suidae; a few subspecies of the wild boar can reach an even larger size. Despite its large size and relatively wide distribution, it was first described only in 1904. The specific name honours Richard Meinertzhagen, who shot the type specimen in Kenya and had it shipped to the Natural History Museum in England. 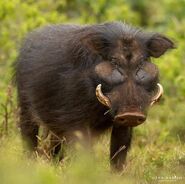 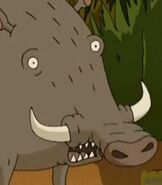