The Parody Wiki
Register
Don't have an account?
Sign In
Advertisement
in: Characters, Animals, Ocean Animals,
and 104 more

The largest living ray and one of the largest of all elasmobranchs, the giant manta ray (Manta birostris) is a stunning and graceful member of the devil ray family (Mobulidae). This giant fish is notable for its sheer size, with anecdotal reports of individuals measuring up to 9.1 meters across. The giant manta ray has a distinctive body shape, with triangular pectoral ‘wings’ a nd paddle-like lobes extending in front of the mouth. Known as ‘cephalic lobes’, these are forward extensions of the pectoral fins which form a funnel-like structure while feeding, helping to channel plankton-filled water into the mouth. The lobes are rolled into a spiral when the giant manta ray is swimming. The broad, disc-like body of the giant manta ray is just over twice as wide as it is long, and there is a small dorsal fin on the back, with a rudimentary spine immediately behind it, on the upper side of the tail. The tail of the giant manta ray is slender and slightly flattened, and is shorter than the width of the disc-like body. The giant manta ray’s eyes are located on the sides of its head, and its gills are on the underside of the body. The cavernous mouth is positioned at the front of the head and has rows of tiny, peg-like teeth on the lower jaw. The coloration of the giant manta ray can be quite variable. Most individuals belong to a ‘chevron morph’, which is predominantly black above and white below, with large white ‘shoulder’ patches on the back. These conspicuous white patches occur on either side of a dark midline, and are more or less triangular or chevron-shaped, with hook-like extensions to the sides. There may also be small patches of white on the tips of the pectoral fins. The underside of the giant manta ray is largely cream to white, with varying degrees of dark spots and patches, mainly on the belly. There is usually a prominent black, semi-circular mark behind the fifth gill slit on each side of the body, and the rear margins of the pectoral fins have dark shading. The giant manta ray also has dark coloration around and inside its mouth. The giant manta ray also occurs in a striking ‘black morph’, which is completely black above and mostly black below, except for a variably sized white area around the gills and belly. Dark spots are often visible on this white patch. Nearly all-white individuals have also been documented. Each giant manta ray possesses a unique pattern of blotches, spots and scars that can be used to identify individuals. Manta rays were previously considered to be a single species, but have recently been split into two separate species based on differences in size, appearance, habitat and behaviour. The giant manta ray grows larger than the reef manta ray (Manta alfredi), and also has a non-functional tail spine, which is absent in the reef manta ray. The white shoulder patches of the reef manta ray form a ‘Y’ shape and gradually fade into the black of the back, whereas those of the giant manta ray form a ‘T’ shape and are clearly distinct from the black back. Reef manta rays also differ in having a white to grey rather than dark mouth, and the dark spots on their underside are more extensive. Studies have suggested that there may be a third species of manta ray, but more evidence is needed before the species are split further. The giant manta ray has the largest brain of all the world’s fishes, and much remains to be discovered about its intelligence and social interactions. Despite its massive size, the giant manta ray feeds on some of the tiniest organisms in the ocean. Giant manta rays often jump clear of the water, possibly as a form of communication or even play. 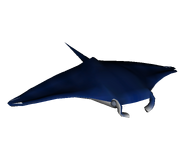 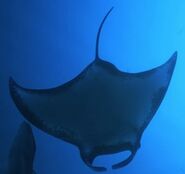 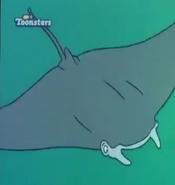 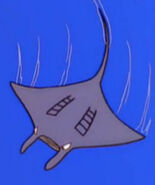 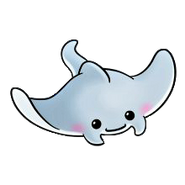 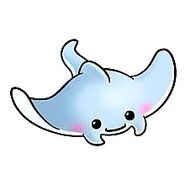 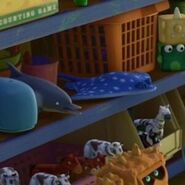