Pachystruthio is a genus of extinct Eurasian bird, which lived in the Late Pliocene to the Early Pleistocene of Georgia and the Crimea. It contains three species, P. pannonicus (the type species), P. dmanisensis, and P. transcaucasicus, which were all formerly placed with the ostrich genus, Struthio. P. dmanisensis was one of the largest members of the genus prior to its reclassification. Although Pachystruthio is known as the giant ostrich, its relationship to the extant Struthio is not clear. 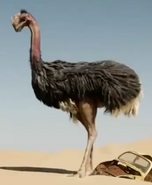 Jumaji: The Next Level (2019)
Community content is available under CC-BY-SA unless otherwise noted.
Advertisement