The Parody Wiki
Register
Don't have an account?
Sign In
Advertisement
in: Characters, Animals, African Animals,
and 23 more

The giant sable antelope, (Hippotragus niger variani), also known in Portuguese as the palanca-negra-gigante, is a large, rare subspecies of sable antelope native and endemic to the region between the Cuango and Luando Rivers in Angola. There was a great degree of uncertainty regarding the number of animals that survived during the Angolan Civil War. In January 2004, a group from the Centro de Estudos e Investigação Científica of the Catholic University of Angola, led by Dr. Pedro vaz Pinto, was able to obtain photographic evidence of one of the remaining herds from a series of trap cameras installed in the Cangandala National Park, south of Malanje. The giant sable antelope is the national symbol of Angola, and is held in a great regard by its people. This was perhaps one of the reasons the animals survived the long civil war. In African mythology, just like other antelopes, they are known to symbolize vivacity, velocity, beauty and visual sharpness. 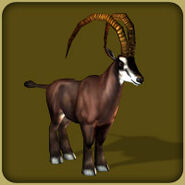 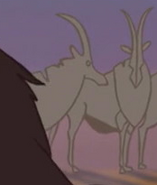