The Parody Wiki
Register
Don't have an account?
Sign In
Advertisement
in: Characters, Animals, Ocean Animals,
and 85 more

The giant squid (Architeuthis dux) remains largely a mystery to scientists despite being the biggest invertebrate on Earth. The largest of these elusive giants ever found measured 59 feet (18 meters) in length and weighed nearly a ton (900 kilograms). However, their inhospitable deep-sea habitat has made them uniquely difficult to study, and almost everything scientists know about them is from carcasses that have washed up on beaches or been hauled in by fishermen. Lately, however, the fortunes of scientists studying these elusive creatures have begun to turn. In 2004 researchers in Japan took the first images ever of a live giant squid. And in late 2006, scientists with Japan's National Science Museum caught and brought to the surface a live 24-foot (7-meter) female giant squid. Giant squid, along with their cousin, the colossal squid, have the largest eyes in the animal kingdom, measuring some 10 inches (25 centimeters) in diameter. These massive organs allow them to detect objects in the lightless depths where most other animals would see nothing. Like other squid species, they have eight arms and two longer feeding tentacles that help them bring food to their beak-like mouths. Their diet likely consists of fish, shrimp, and other squid, and some suggest they might even attack and eat small whales. They maneuver their massive bodies with fins that seem diminutive for their size. They use their funnel as a propulsion system, drawing water into the mantle, or main part of the body, and forcing it out the back. Scientists don't know enough about these beasts to say for sure what their range is, but giant squid carcasses have been found in all of the world's oceans. 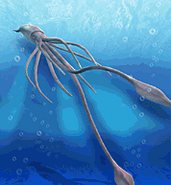 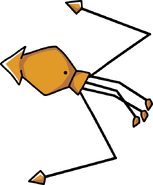 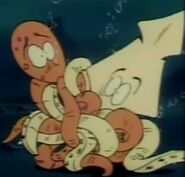 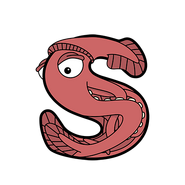 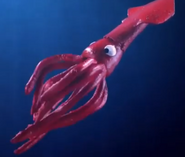 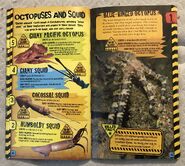