The Parody Wiki
Register
Don't have an account?
Sign In
Advertisement
in: Characters, Animals, North American Animals,
and 6 more

Greta oto is a species of brush-footed butterfly and member of the subfamily Danainae, tribe Ithomiini, and subtribe Godyridina. It is known by the common name glasswing butterfly for its unique transparent wings that allow it to camouflage without extensive coloration. In Spanish speaking regions, it may also be referred to as espejitos, meaning "little mirrors" because of its transparent wings. The butterfly is mainly found in Central and northern regions of South America with sightings as far north as Texas and as far south as Chile. While its wings appear delicate, the butterfly is able to carry up to 40 times its own weight. In addition to its unique wing physiology, the butterfly is known for behaviors such as long migrations and lekking among males. 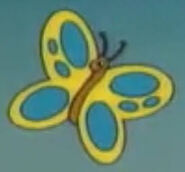