Gnomeo is the male protagonist of the 2011 Touchstone Pictures film Gnomeo & Juliet and 2018 Paramount Pictures sequel film Sherlock Gnomes. He is based on Shakespeare's character Romeo.

He Played Aladdin in Gnomeoladdin

He Played Harry Osborn in The Amazing Spider-Man 2.

Harold "Harry" Osborn is an old friend of Peter Parker and the son of the late Norman Osborn who becomes the supervillain known as Green Goblin.

He Played Tramp in Juliet and the Gnomeo

He Played Ben in Rukiahontas 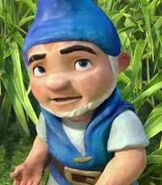 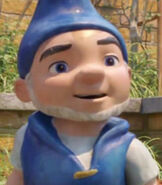 Add a photo to this gallery
Retrieved from "https://parody.fandom.com/wiki/Gnomeo?oldid=2521116"
Community content is available under CC-BY-SA unless otherwise noted.