The Parody Wiki
Register
Don't have an account?
Sign In
Advertisement
in: Male Characters, Villains, Dinosaurs,
and 17 more

Godzilla's appearance has changed between films over the years, but many defining details have endured. In the Japanese films, Godzilla is depicted as a gigantic dinosaur with rough, bumpy, usually charcoal gray scales, a long powerful tail, and generally bone-white

dorsal plates, generally shaped like maple leaves, though there are some designs whose traits may differ. His origins vary somewhat from film to film, but he is almost always described as a prehistoric creature, and his first attacks on Japan are linked to the beginning of the Atomic Age. In particular, mutation due to atomic radiation is presented as an explanation for his great size and strange powers. Godzilla's iconic design is composed of a mixture of various species of dinosaurs; specifically, he has the body and overall shape of an old model of a Tyrannosaurus rex, the long arms of an Iguanodon, and the dorsal plates of a Stegosaurus.

Godzilla, in the original film, the Heisei era, some of the Millennium era, and Godzilla 2014, is an animal with semi-sapience that stumbles upon human civilization without any malicious intent, only destroying man-made structures or obstacles like buildings when the humans provoke him, or, when dead-set on arriving at a certain location. In Godzilla, Mothra and King Ghidorah: Giant Monsters All-Out Attack, Godzilla is a malicious entity created from the restless souls of the dead from World War II. As the Godzilla series continued into the 60's and 70's, the terrifying monster developed as a character, and has since become a savior of the Earth, saving the world from other monsters like King Ghidorah, the Showa MechaGodzilla, Biollante, and Monster X, alone or alongside other monsters like Rodan, Anguirus, and Mothra.

According to Mothra's Shobijin's translation of Mothra, Rodan and Godzilla's conversation in Ghidorah, the Three-Headed Monster, Godzilla only "hates humans because they hate him."

In Legendary Pictures' Godzilla, Godzilla's behaviour seems to be that of a territorial animal. However, unlike previous incarnations, he doesn't blatantly attacks or plows through ships at sea simply because they were there. In fact, with larger ships like Aircraft Carriers, he dove down under them. He also didn't attack military vehicles unless he was attacked first, and even then goes out of his way to avoid fighting back. Godzilla also seemed to have some awareness for human life, such as he saved Ford from the female M.U.T.O.. He also didn't seem to mind large ships following along side him. Additionally, Godzilla puts himself in the direct fire to shield humans several times over the course of the film from both the M.U.T.O.s and stray military fire. The reason why Godzilla didn't just dive again when the navy and army panicked and fired on him was to shield the humans on the bridge, though missiles hitting his gills made him to involuntarily plow through the Golden Gate Bridge. After defeating both M.U.T.O.s, he leaves the humans alone without any more conflict.

He Is A Dachshund

He Is A Shark

He is A Gorilla in The Cage In The Parade Scene

He is A Hawk 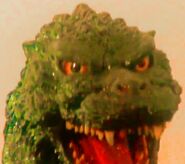 Godzilla 1992 in Godzilla and Mothra: The Battle for Earth.