The Parody Wiki
Register
Don't have an account?
Sign In
Advertisement
in: Characters, Animals, Asian Animals,
and 33 more

The beautiful golden snub-nosed monkey (Rhinopithecus roxellana) has blackish-grey shoulders, upper arms, back, crown, and tail, with the back being covered in a longer layer of fine silver hairs. In males, the sides of the head, forehead, and neck and underparts are bright golden in colour, hence the common name of this species. Females are generally similar in appearance to males, but the head and upperparts are more brownish black. Their noses are, as the name suggests, flattened and set back from the muzzle. The wide nostrils face forwards and there are two small flaps of skin above the nostrils that nearly touch the forehead. These monkeys produce a wide range of vocalisations often, remarkably, without making any facial movements, in the manner of a ventriloquist. 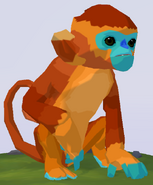