The Parody Wiki
Register
Don't have an account?
Sign In
Advertisement
in: Characters, Females, Super Why Characters,
and 10 more

Goldilocks is one of the little girls living at Storybook Village. Often she is seen taking care, or playing with, Baby Bear and Joy Beanstalk (occassionally).

As said, when she first appeared, Goldilocks was only concerned with having fun and playing around or just goofing off. She didn't bother to reconsider her actions until realizing she had made such a mess of the three bears home and they were very unhappy about it. So in hopes of making up with them, Goldilocks had helped to clean it up and she has apologized for her mistake. Since then, she has matured in a more thoughtful girl. She doesn't seem to be childish at all and isn't as careless.

She is often seen playing with Baby Bear and may babysit him due to her now friendly relationship with the entire bear family.

Goldilocks is also very smart and just a teensy bit sensitive when she is wrongly accused of things. To the point of hiding instead of facing the problem head on if she lacks any proof that can help her prove her innocence.

She may also be a friend of Princess Pea's as she offered her popcorn in Snow White, and a ride in the bouncy castle in Landon's Circus Adventure.

Goldilocks mainly has stayed the same between her normal self, and her story self. Though with minor outfit differences, possibly meaning Storybook Village Goldilocks is older then the storybook version.

Goldilocks is a fair skinned girl with big blue eyes and long golden curled hair that is about chest length. Her bangs curl framing her face, while staying out of them. Normally, she wears a deep blue-purple tanktop dress over a teal-aqua green tee-shirt, stripes stockings/pantyhose matching her attire, and purple flats with tiny white bows at the toe.

For Halloween, Goldilocks put on some makeup and a pair of cat ears. 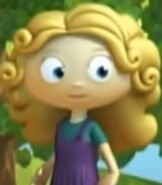 Goldilocks in The Goose and the Golden Eggs 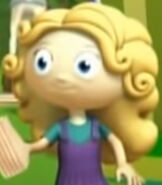 Goldilocks in Snow White
Community content is available under CC-BY-SA unless otherwise noted.