The fast-talking Goo Goo Ga Ga (called Goo for short and referred by her full name only in her first appearance Go Goo Go) has a hyperactive imagination, and is always seen wearing her hair in three braids, with a rainbow shirt, overalls and yellow cowboy boots. Whenever she went near Foster's, she became over-stimulated and created scores of new imaginary friends. She was, therefore, banned from the house indefinitely.

Unaware of the rule, Mac brought her inside after an incident involving an eight-man toboggan stuck in a tree that Bloo needed (even though it was the middle of June, it was a long story that he didn't feel like telling), which broke the strap on his backpack. In any case, after seeing Bloo, she imagined up a hoarde of similar versions, all with one extra feature or another. After Bloo let her in the next day, Frankie and Mr. Herriman got the mistaken impression that Mac let her in (and that he was in love with her, much to his growing annoyance/anger).

After Goo filled the house with so many friends that it became unlivable, Frankie and Mr. Herriman said that Mac shouldn't come to Foster's anymore, probably ever, because they believed Mac was responsible for Goo always going there. Because of this, Mac finally snapped and let it out on her saying that he doesn't like her and tells her that she's annoying, weird and talks too much and too fast, because she's a chatterbox and that everyone thinks/knows she is a nuisance and want her to just go home.Goo began to cry as Mac can see her sad face already feeling bad right away and she drops the box with his backpack in front of him and followed Goo to the bedroom where Bloo sleeps after Mac yelled at her. Goo then revealed that the reason she created imaginary friends all the time is because she was lonely. Mac told her that imaginary friends are real friends and that they love her for who she is. He also told her to stop imagining so many friends in order to get to know the ones she already created. After which, he apologized for hurting her feelings and tells her that if she's not too mad, he wants to be her friend, too, to which she gladly accepts From then on, she learned to control her imagination and Mac promised to play with her, but after what Frankie and Mr. Herriman told him he won't come to Foster's anymore, he decides to leave and never return. Everyone at Foster's no longer care for him. Not even Frankie, his now former girlfriend. The only one who cares about him was Goo. Her name is a reference to the stereotypical sound that a baby makes. Her parents, who don't believe in "stifling her creative mind," allowed her to pick her own name as an infant.

Though she has committed herself to not make any more imaginary friends, she still sometimes does so accidentally or to sometimes help with something, and has devoted herself in making sure her scores of imagined friends have a place to live. Since her debut, Goo has become a recurring character on the series.

Goo might actually be the most powerful human in the Foster's universe. Her extreme and unbridled imagination can allow her to create any imaginary friend to suit her desire, from several friends to help create a paper mashay pony, to an out of control living car jack. She could practically create an entire army at a whim.

Bad to the Phone

Goo makes a cameo in the short "Bad to the Phone," helping Bloo come up with a new recording message for the phone, along with a bunch of other imaginary friends such as Wilt, Clumsy, Sunset Junction, and the Bloo clones from "Bloo's Brothers."

Since September 2006, Goo has been a regular in the interactive Foster's game Big Fat Awesome House Party, as she creates "buddies" that can be earned in the mini-games or by doing certain chores.

She Played Chloe in We Bare Equids and We Bare Sharks 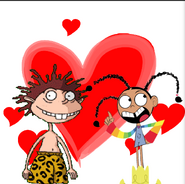 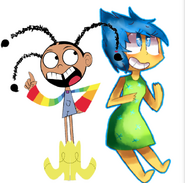 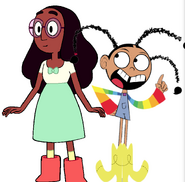 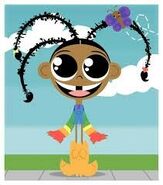 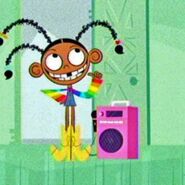 Add a photo to this gallery
Retrieved from "https://parody.fandom.com/wiki/Goo_Foster?oldid=2188236"
Community content is available under CC-BY-SA unless otherwise noted.