The Parody Wiki
Register
Don't have an account?
Sign In
Advertisement
in: Characters, Animals, Australian Animals,
and 36 more

Goodfellow's tree-kangaroo (Dendrolagus goodfellowi) also called the ornate tree-kangaroo, belongs to the family Macropodidae, which includes kangaroos, wallabies and their relatives, and the genus Dendrolagus, with eleven other species. The species is native to the rainforests of New Guinea, and the border of central Irian Jaya in Indonesia. Under the IUCN classification, the species is listed as Endangered, which is a result of overhunting and human encroachment on their habitat. It is named after British zoological collector Walter Goodfellow. 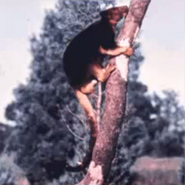