Gorgosaurus is a genus of tyrannosaurid theropod dinosaur that lived in western North America during the Late Cretaceous Period, between about 76.6 and 75.1 million years ago. Fossil remains have been found in the Canadian province of Alberta and possibly the U.S. state of Montana. Paleontologists recognize only the species, G. libratus, although other species have been erroneously referred to the genus. Gorgosaurus just appear on as aventuras do didelphodon as a cameo 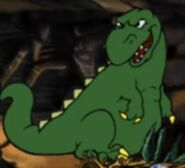 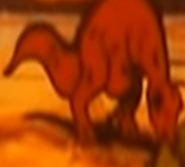