Governor Ratcliffe is the main antagonist in the animated Disney movie Pocahontas as well as its sequel. He is very loosely based on the historical figure John Ratcliffe though in truth he takes on the qualities of many of history's ambitious and morally dubious pioneers as well as the usual traits of a Disney villain (such as a love of power, arrogance and a flair for the dramatic).

He was voiced by David Ogden Stiers

He is a Toy Box

He played the Indian Chief in Jason Pan

He is the Indian chief and Tiger Lily's father

He played Clayton in Allazan

He played Steele in Ericto

He is a husky

He played Ratigan in The Great Muppet Detective

He played Amos Slade in The Chinese and the Russian

He played Forte in Beauty and the Jedi 2: Enchanted Christmas

he is a Pipe Organ

He played The Huntsman in Selena White and the Seven Toons 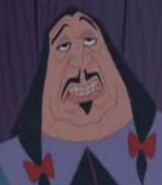 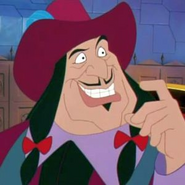 Ratcliffe in Pocahontas 2 Journey to a New World

Ratcliffe's defeat in Sorcerers of the Magic Kingdom

Add a photo to this gallery
Retrieved from "https://parody.fandom.com/wiki/Governor_Ratcliffe?oldid=2505629"
Community content is available under CC-BY-SA unless otherwise noted.