The Parody Wiki
Register
Don't have an account?
Sign In
Advertisement
in: Characters, Animals, European Animals,
and 37 more

The grass snake (Natrix natrix) is Britain's largest terrestrial reptile. This snake is typically olive-green, brown or greyish in colour, with a variable row of black bars along the sides, occasionally with smaller round markings along the back in double rows. The underside of the grass snake is off-white or yellowish with dark triangular or rectangular markings. A characteristic black and yellow collar is present behind the head, which has earned the species the alternative name of 'ringed snake'. Totally black (melanistic) forms and albinos occasionally arise. Male and female grass snakes are generally similar in appearance, although females are often larger; males can be identified by the presence of a swelling at the base of the tail and by the fact that they have longer tails relative to females. 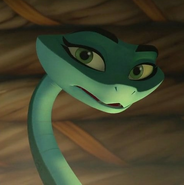 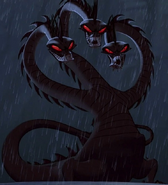