She Played Yzma In The Street Rat's New Groove

She is a Evil Woman

She Played as Mrs. Toad In Sawyerlina

She is a Toad

She is a Hag

She Played Ursula In The Little Padme

She is a Sea Witch

She Played Morgana In The Little Arabian Princess 2:Return to The Sea

She is Ursula's Sister

She Played Joanna In The Rescuers Down Under (Coolzdane Human Style)

She Played Scarlet Overkill in ??? (Minions)

She Played Hildy Gloom in 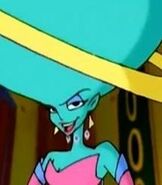 Add a photo to this gallery
Retrieved from "https://parody.fandom.com/wiki/Gravitina?oldid=1532095"
Community content is available under CC-BY-SA unless otherwise noted.