The Parody Wiki
Register
Don't have an account?
Sign In
Advertisement
in: Characters, Animals, North American Animals,
and 62 more

At over a meter and half in height, the great blue heron (Ardea herodias) is the largest heron in North America and one of the continent’s most recognizable wading birds. There are two main color morphs of this statuesque species: a dark form that is mostly blue-grey, with chestnut thighs, and a white cap over a black eye stripe that merges into long, black plumes; and a light form which is all white. The neck, legs and wings are characteristically long, the tail is short, and the yellowish bill is thick, elongate and tapered. In flight, it coils its neck back into a distinctive s-shape, extends its legs back along its body axis, and beats its wings with steady, powerful strokes. Although the sexes are similar in appearance, the female is normally around ten percent smaller than the male, while juveniles are duller and lack the long plumes of the adults. Considerable uncertainty surrounds the separation of subspecies of the great blue heron, with between two and seven recognised for North America alone. 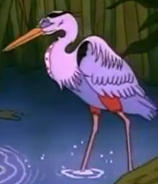 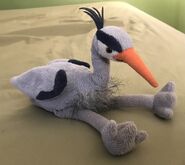 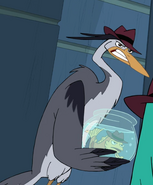 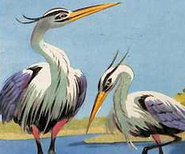