The Parody Wiki
Register
Don't have an account?
Sign In
Advertisement
in: Characters, Animals, Amphibians,
and 31 more

The great crested newt, also known as the northern crested newt or warty newt (Triturus cristatus) is a newt in the family Salamandridae, found across Europe and parts of Asia. It is a large newt, with females growing up to 16 cm (6.3 in) long. Its back and sides are dark brown, while the belly is yellow to orange with dark blotches. Males develop a conspicuous jagged crest on their back and tail during the breeding season. The great crested newt spends most of the year on land, mainly in forested areas in lowlands. It moves to aquatic breeding sites, mainly larger fish-free ponds, in spring. Males court females with a ritualized display and deposit a spermatophore on the ground, which the female then picks up with her cloaca. After fertilization, a female lays around 200 eggs, folding them into water plants. The larvae develop over two to four months before metamorphosing into terrestrial juveniles (efts). Both larvae and land-dwelling newts mainly feed on different invertebrates. 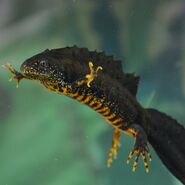 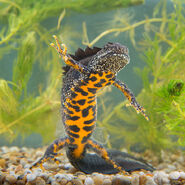