The Parody Wiki
Register
Don't have an account?
Sign In
Advertisement
in: Characters, Animals, North American Animals,
and 48 more

The great egret (Ardea alba) is a large heron which, as an adult, has entirely white plumage with contrasting black feet and long, black legs. Color is added by its bright yellow bill, tipped with black, and the greenish-yellow area between the bill and the eye. Like many herons, it has a long neck that is pulled into an ‘s’-shaped curve when in flight. During the breeding season the great egret displays wonderful, elegant plumes on its back, which extend up to ten centimeters past the tail and are used in courtship displays. In these displays, the great egret spreads its plumes out like a fan, rather like a peacock. Juvenile great egrets look similar to the adults but without the ornamental breeding plumes. The great egret gives a variety of calls, including a low-pitched ‘kraak’ call that is given in flight, when disturbed, and as a threat call. 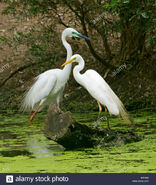 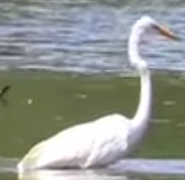