The Parody Wiki
Register
Don't have an account?
Sign In
Advertisement
in: Characters, Animals, Asian Animals,
and 59 more

The male Great Indian hornbill (Buceros bicornis) has a total length (from tip of the bill to the tip of the tail) of about 130 cm, the female is slightly smaller. It has a black face, chin, back and lower breast, the back with a metallic gloss. The crown, neck, upper breast, lower abdomen, thighs, upper- and under-tail coverts are white. The wings are black with white tips to the greater and median coverts forming a white band across the wing, and white tips to the primaries and secondaries, forming a white terminal band. The is white with a broad black subterminal band. The white is often stained yellow with preen-gland oil. The bill and the "horn" (casque) is yellow at the base, becoming orange to red towards the tip. There is no sexual dimorphism in the plumage but in the female, the iris of the eye is white, while the skin surrounding the eye is pink to red. In males, the iris is red, with black skin surrounding the eye. 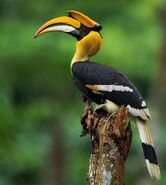 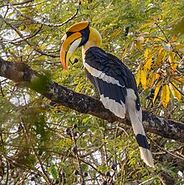