The Parody Wiki
Register
Don't have an account?
Sign In
Advertisement
in: Characters, Animals, North American Animals,
and 18 more

The greater prairie chicken (Tympanuchus cupido) is a stocky brown, strongly barred grouse with paler coloured stripes, most easily recognised by the male’s distinctive and impressive appearance during courtship display. During the male’s display, prominent, elongated pinnae (adapted neck feathers) become erected over the head, and large yellow-orange air sacs in the neck and above the eye become inflated. Both sexes possess these prominent neck feathers but they are longer in males. The sexes can also be distinguished by the short, square tail being dark brown in males, but barred brown and tan in females. Other features of this species include an obvious dark eye-stripe, pale throat, and legs that are feathered down to the toes. During the mating season, males make a loud “booming” noise that can be heard half a mile away, amplified by their inflated air sacs. 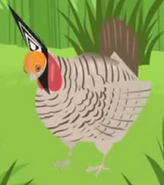