The Parody Wiki
Register
Don't have an account?
Sign In
Advertisement
in: Characters, Animals, North American Animals,
and 10 more

The green darner or common green darner (Anax junius), after its resemblance to a darning-needle, is a species of dragonfly in the family Aeshnidae. One of the most common and abundant species throughout North America, it also ranges south to Panama. It is well known for its great migration distance from the northern United States south into Texas and Mexico. It also occurs in the Caribbean, Tahiti, and Asia from Japan to mainland China. It is the official insect for the state of Washington in the United States. The green darner is one of the largest extant dragonflies: males grow to 76 mm (3.0 in) in length with a wingspan of up to 80 mm (3.1 in). Females oviposit in aquatic vegetation, eggs laid beneath the water surface. Nymphs (naiads) are aquatic carnivores, feeding on insects, tadpoles and small fish. Adult darners catch insects on the wing, including ant royalty, moths, mosquitoes and flies. 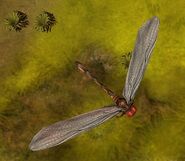