The green peafowl (Pavo muticus) is famous for the glorious train carried by the male, the green peafowl lifts these metre-long iridescent upper tail feathers into a quivering fan when displaying. Each of the 200 metallic feathers ends in a beautiful brown, green and gold eyespot. The green peafowl is less well known, but perhaps even more spectacular than its close relative the Indian Peafowl (Pavo cristatus), and has a more upright posture, a greener neck, and a darker, more golden train. The male has a long, green and tightly bundled head-crest which is held erect. The feathers of the head and neck are dark bluish-green and have a metallic sheen, but leave bare blue and yellow skin on show beneath the eyes. The wings are dark green and blue with pale brown flight feathers. Females are not brown, as in the Indian peafowl, but are a less vivid shade of green, and lack the train. Juveniles resemble the female. Males call with a repeated, territorial ‘ki-wao’, whereas females give a loud ‘aow-aa’ The green peafowl is one of the largest birds in the order of Galliformes. 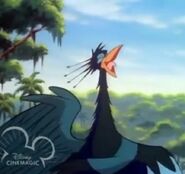 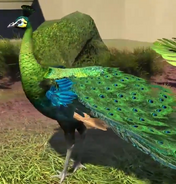