The Parody Wiki
Register
Don't have an account?
Sign In
Advertisement
in: Characters, Animals, Ocean Animals,
and 11 more

The Greenland shark (Somniosus microcephalus) has the longest known lifespan of all vertebrate species. One Greenland shark was tagged off Greenland in 1936 and recaptured in 1952. Its measurements suggest that Greenland sharks grow at a rate of 0.5–1 cm (0.2–0.4 in) per year. In 2016, a study based on 28 specimens that ranged from 81 to 502 cm (2.7–16.5 ft) in length determined by radiocarbon dating of crystals within the lens of their eyes, that the oldest of the animals that they sampled, which also was the largest, had lived for 392 ± 120 years and was consequently born between 1504 and 1744. The authors further concluded that the species reaches sexual maturity at about 150 years of age. 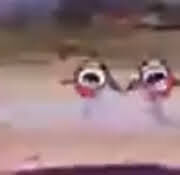