The Parody Wiki
Register
Don't have an account?
Sign In
Advertisement
in: Characters, Animals, Australian Animals,
and 15 more

The grey-headed flying fox (Pteropus poliocephalus) is a megabat native to Australia. The species shares mainland Australia with three other members of the genus Pteropus: the little red P. scapulatus, spectacled P. conspicillatus, and the black P. alecto. The grey-headed flying fox is endemic to the south-eastern forested areas of Australia, principally east of the Great Dividing Range. Its range extends approximately from Bundaberg in Queensland to Geelong in Victoria, with outlying colonies in Ingham and Finch Hatton in the north, and in Adelaide in the south. In the southern parts of its range it occupies more extreme latitudes than any other Pteropus species. As of 2008 the species is listed as "Vulnerable" on the IUCN Red List of Threatened Species. 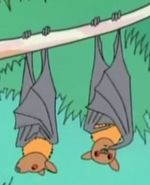