It has two subspecies separated by the Rio Negro: The nominate from the Guiana Shield, and napensis from the north-western Amazon. Although their plumage differences are relatively minor, some have suggested they should be treated as separate species (instead of subspecies) due to genetic differences. Genetic evidence also suggests ochroptera, traditionally considered a subspecies of the pale-winged trumpeter, actually is closer to the grey-winged trumpeter.

The grey-winged trumpeter is a dumpy, guineafowl-like bird with a long neck and legs, and short yellow chicken-like bill. It is 48–56 centimetres (19–22 in) long and 1.3 kilograms (2.9 lb) in weight. The soft plumage is mainly black, but the feathers of the inner wing are grey.

These are gregarious forest birds which nest in hollow trees, laying 3-4 white eggs that are incubated by all members of a group of five or more birds. When not breeding, the flocks may number 50 or more. Their food is insects and fruit, picked off the ground. They are weak fliers, and will run by preference.

The grey-winged trumpeter's song is a low humming, but its call, as its name suggests, is a very loud JEEK or honking TZAAK. This bird is kept as a pet by Amerindians, since it is easily tamed, hunts snakes, and is a very efficient sentinel, with its unmissable alarm call.

A captive grey-winged trumpeter named Trumpy was kept at Jersey Zoo by the author Gerald Durrell, and was noted for interacting with the people and animals of the zoo. "Trumpy" is mentioned several times in Durrell's book "Menagerie Manor". 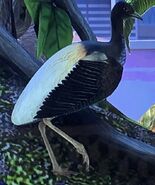 Add a photo to this gallery
Retrieved from "https://parody.fandom.com/wiki/Grey-Winged_Trumpeter?oldid=1673614"
Community content is available under CC-BY-SA unless otherwise noted.