The Parody Wiki
Register
Don't have an account?
Sign In
Advertisement
in: Characters, Animals, African Animals,
and 100 more

The grey crowned crane (Balearica regulorum), also known as the African crowned crane, golden crested crane, golden-crowned crane, East African crane, East African crowned crane, Eastern crowned crane, South African crane, is a bird in the crane family, Gruidae. It is found in eastern and southern Africa, and is the national bird of Uganda. The grey crowned crane is closely related to the black crowned crane, and the two species have sometimes been treated as the same species. The two are separable on the basis of genetic evidence, calls, plumage and bare parts, and all authorities treat them as different species today. It occurs in dry savannah in Sub-Saharan Africa, although it nests in somewhat wetter habitats. They can also be found in marshes, cultivated lands and grassy flatlands near rivers and lakes in Uganda and Kenya and as far south as South Africa. This animal does not have set migration patterns, and birds nearer the tropics are typically sedentary. Birds in more arid areas, particularly Namibia, make localized seasonal movements during drier periods. 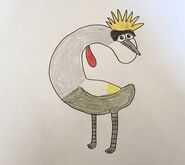 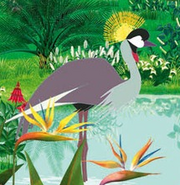 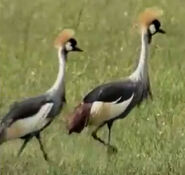 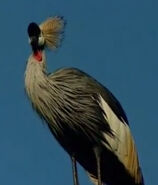 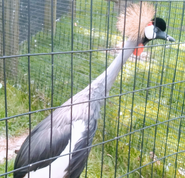 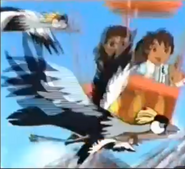 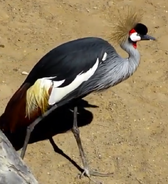