The Parody Wiki
Register
Don't have an account?
Sign In
Advertisement
in: Characters, Animals, Asian Animals,
and 43 more

The grey langur (Semnopithecus spp.) is native to Bhutan, India and Nepal. The grey langur is also known as the Hanuman langur after the monkey-god Hanuman, and is considered sacred in the Hindu religion. Other names include Indian langur, Himalayan langur and Himalayan gray langur. The grey langur is mainly arboreal, and feeds on leaves. There are seven recognizable species of Semnopithecus. Grey langurs are largely gray (some more yellowish), with a black face and ears. Externally, the various species mainly differ in the darkness of the hands and feet, the overall color and the presence or absence of a crest. Typically all north Indian gray langurs have their tail tips looping towards their head during a casual walk whereas all south Indian and Sri Lankan gray langurs have an inverted "U" shape or a "S" tail carriage pattern. There are also significant variations in the size depending on the sex, with the male always larger than the female. The average weight of gray langurs is 18 kg (40 lb) in the males and 11 kg (24 lb) in the females. The head-and-body length is from 51 to 79 cm (20 to 31 in). Their tails, at 69 to 102 cm (27 to 40 in) are always longer than their bodies. Langurs from the southern part of their range are smaller than those from the north. At 26.5 kg (58 lb), the heaviest langur ever recorded was a male Nepal gray langur. The larger gray langurs are rivals for the largest species of monkey found in Asia. Grey langurs mostly walk quadrupedally and spend half their time on the ground and the other half in the trees. They will also make bipedal hops, climbing and descending supports with the body upright, and leaps. Langurs can leap 3.7–4.6 m (12–15 ft) horizontally and 10.7–12.2 m (35–40 ft) in descending. 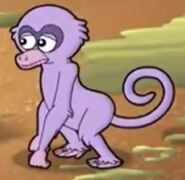