The Parody Wiki
Register
Don't have an account?
Sign In
Advertisement
in: Characters, Animals, European Animals,
and 32 more

The grey seal (Halichoerus grypus) is the larger of Britain's two species of breeding seal. The coat colour varies from grey to brown to silver, often with blotches. Males (bulls) can be distinguished from females by the pattern of darker and lighter fur colour. In males, the continuous background colour is dark, but in females is it light. Juveniles are born with a creamy white natal coat. The nostrils are parallel, and the 'Roman' nose is characteristic, especially in males; the scientific name derives from the Greek for 'hooked-nose sea-pig'. Although typically diving to depths of up to 70 metres when feeding, grey seals can dive to depths of around 300 metres. Feeding on milk rich in fat, grey seal pups can quadruple in size during the three weeks they are fed by their mothers. 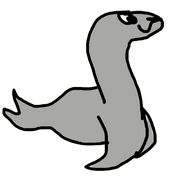