The Parody Wiki
Register
Don't have an account?
Sign In
Advertisement
in: Characters, Animals, African Animals,
and 69 more

The unusual ground pangolin (Smutsia temminckii), also known as Temminck's pangolin or Cape pangolin or grand pangolin, is one of four species of pangolins which can be found in Africa, and the only one in southern and eastern Africa. It belongs to a group of eight armour-plated species, (order Pholidota), distinguished from other mammals by their protective layer of horny scales. Its long, streamlined body; small, cone-shaped head; and thick tail are covered with overlapping yellow-brown scales, composed of fused hairs and shaped like artichoke leaves. The ground pangolin’s underside and inner surfaces of the limbs are the only parts of the body not protected by scales, but when threatened, the pangolin can roll into an almost impregnable ball, wrapping its muscular tail around the body and leaving only sharp scales exposed to predators. The ground pangolin’s strong forelegs bear long, robust claws, capable of digging in the ground and tearing apart ant and termite nests. A specialist in eating ants and termites, the toothless ground pangolin possesses many other adaptations for this diet including a long, conical tongue used to lap up prey; an acute sense of smell to locate its food; and thick eyelids to protect its eyes from ant bites. 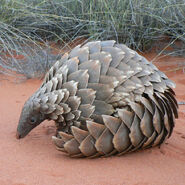 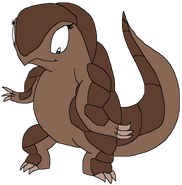 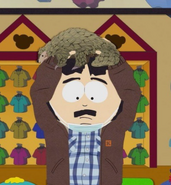