The Parody Wiki
Register
Don't have an account?
Sign In
Advertisement
in: Gruffalo Characters, Heroes, Protagonists,
and 29 more

The Gruffalo first appeared when a mouse walk to a nut tree. Earlier on, the mouse made him up to scare away a fox, owl and snake from eating him and thinks that there's no such thing as a gruffalo when he came across him and discovers that he's actually real all along. The Gruffalo 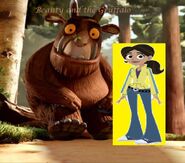