The Parody Wiki
Register
Don't have an account?
Sign In
Advertisement
in: DuckTales Characters, Characters voiced by Will Ryan, Walt Disney Television Characters,
and 6 more

Gyro Gearloose is an anthropomorphic chicken created by Carl Barks for The Walt Disney Company. He is part of the Mouse and Duck universe, appearing in comic book stories as a friend of Donald Duck, Scrooge McDuck and anyone who is associated with them.

Gyro first appeared in the Carl Barks comic Gladstone's Terrible Secret (Walt Disney's Comics and Stories #140). He made his first animated appearance in a 1950' full length movie. On the Sport Goofy Soccermania television special with only one line of dialogue, voiced by Will Ryan: "Scrooge parting with a million dollars?", in the subsequent 1987 animated series DuckTales, Gyro became a regular character, with Hal Smith supplying his voice while Barry Gordon records it in several episodes. Among Gyro's noteworthy inventions in the series was the creation of the GizmoDuck suit, intended to be worn by a security guard for Scrooge McDuck's Money Bin. 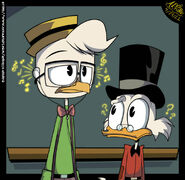