The Parody Wiki
Register
Don't have an account?
Sign In
Advertisement
in: Characters, Animals, Australian Animals,
and 14 more

The Haast's eagle (Harpagornis moorei) is an extinct species of eagle that once lived in the South Island of New Zealand, commonly accepted to be the Pouakai of Maori legend. The species was the largest eagle known to have existed. Its primary prey was suspected to consist of moa. This eagle's massive size may have been an evolutionary response to the size of its prey, as both would have been much smaller when they first came to the island, and would have grown larger over time due to lack of competition (see island gigantism). Haast's eagle became extinct around 1400, when its major food source, the moa, were hunted to extinction by Maori, and much of its dense-forest habitat was cleared by them. 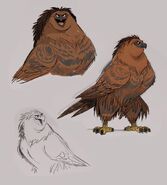 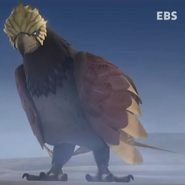