He is character of Pound Puppies

He Played the Charming Tuxedo Mask In Sailor Charlamange

He Played Drew In Pokemon

He Played Brick In The PPG (1985Movies Style)

He Played Dave Se In Jimmy and the Boys

He Played Scooby Dum In The Danny Doo Shows 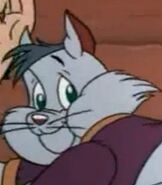 Hairball as Darien/Tuxedo Mask
Add a photo to this gallery
Retrieved from "https://parody.fandom.com/wiki/Hairball?oldid=947324"
Community content is available under CC-BY-SA unless otherwise noted.