The Parody Wiki
Register
Don't have an account?
Sign In
Advertisement
in: Characters, Animals, Ocean Animals,
and 23 more

The harbor porpoise (Phocoena phocoena) is the most commonly seen porpoise, and is the most widely distributed of all cetaceans (whales and dolphins) in northern Europe. It is easily recognised as it has a low triangular dorsal fin and lacks a beak. It is small in comparison to other porpoises, has a plump body with a dark grey to bluish coloured back, a pale belly and a rounded head. At birth, young harbor porpoises are dull in colour and typically have 'birth lines', which look like folds in the skin, and persist for the first few hours after birth. 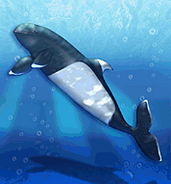