The Parody Wiki
Register
Don't have an account?
Sign In
Advertisement
in: Characters, Cocomelon Characters, Rabbits,
and 10 more

The hare is a character who first appeared in Cocomelon's adaptation of The Tortoise and the Hare in a video with the same name.

The hare first appeared in The Tortoise and the Hare where he was speeding along to which the others got annoyed of. The tortoise was most annoyed and challenged the hare to a race which he laughed at. Much to the hare's surprise the tortoise ended up winning.

He appears again in Looby Loo as one of the guests and daces. He soon dances with YoYo.

The hare appears to have tan fur with white fur on his arms, legs, belly, and around his mouth. He has tall ears which are pink inside and a pink nose and cheeks. His eye color is brown. 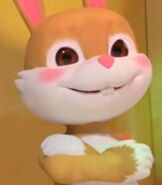 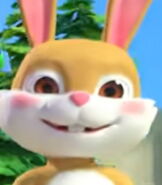 Hare in One Potato, Two Potatoes 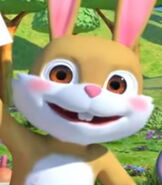