The Parody Wiki
Register
Don't have an account?
Sign In
Advertisement
in: Super Mario Characters, Heroines, Villains,
and 19 more

Hariet|ハリエット|Harietto|,lit. Hariet}} is one of the Broodals that can be fought in Super Mario Odyssey. Her name comes from "hare" and is sometimes given the name Harriet. In the main story, she is fought in the missions "Inverted Pyramid Showdown" and “Big Broodal Battle” (along with the other Broodals.)

She is the only female Broodal and wears a purple dress, gloves, pumps, and a little hat with a little bow on it over the left side of her hair.

Judging from her Dark Side's Kingdom Brochure Bio, Hariet is not as predictable as the other Broodals are. She masters in pyrokinesis, apparently. She is also shown to be devious as the last few lines describe her as such with spare explosives with her yet she is also reckless filling her hat with these explosives. Her bio also states that her bombs were "homemeade".

Hariet is fought first on the Inverted Pyramid in Tostarena. In the battle, she is wearing a spike helmet, preventing Mario from jumping on her, and tries to throw bombs at Mario. Mario must use Cappy to reflect the bombs back at her to remove her spike helmet, so she can be stomped on.

After being jumped on, Hariet will fly around in a saucer fashion, laughing maniacally, while dropping down many of bombs, which will leave little lava puddles after their detonation, before finally landing and resetting the cycle. After her being finished off, she becomes stunned and collapses.

She is fought for the second time in Bowser's Castle in this battle, Hariet has two braids, so she can throw two bombs at once. The battle is otherwise the same, and is repeated on the Dark Side, after Topper is beaten.

She is fought for the final time in Rabbit Ridge, where she is the second Broodal fought. She scolds Mario and Cappy for barging into the Broodals' kingdom and says that she still has things to teach them. Aside from the moon's different gravity, the fight is the same as in Bowser's Kingdom. She also helps pilot the RoboBrood in its second fight against Mario, in a fight quite similar to the one in Bowser's Kingdom.

It's best not to get her mad.

The least predictable of the Broodals, Hariet is most often found throwing bombs with her hair. When her homemade bombs explode, they leave a pool of fire on the ground, so try knocking them away before they explode. While it may seem reckless to have filled her hat with bombs, Hariet is devious and keeps a lot of spare explosives with her, so watch out! 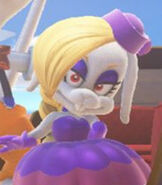