The Parody Wiki
Register
Don't have an account?
Sign In
Advertisement
in: Characters, Animals, North American Animals,
and 88 more

The adult harp seal (Pagophilus groenlandicus) is distinguished by the black markings on the upperside of its body, which create a harp or horseshoe shape, giving this species its common name. The scientific name for the harp seal, Pagophilus groenlandicus, means ‘ice-lover from Greenland'. The fur of the adult harp seal is silvery-grey, and may be mottled with black spots in the female. The male typically has a black band running down its sides. The wide face of the adult harp seal is black to just behind its closely-set eyes, and has well-developed, sensitive whiskers. The female harp seal is slightly smaller than the male and has a somewhat paler, spotted face. The female harp seal is generally slightly smaller than the male. The fore and hind flippers of the harp seal bear black claws. Harp seals pups are known as ‘whitecoats’ due to their thick, white, insulating fur, which becomes whiter in the first two weeks of life. After two weeks, this fur begins to moult, revealing the silver-grey and black fur beneath. The vocalisations of the adult harp seal include trills and clicks, as well as bird-like noises and threatening growls by older individuals, all of which are heard more distinctly during the breeding season. Harp seal pups make bawling noises when they are hungry, as well as mumbling sounds while playing with each other. 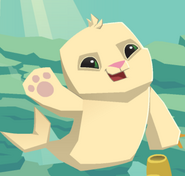 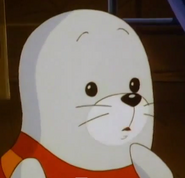 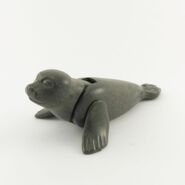