The Parody Wiki
Register
Don't have an account?
Sign In
Advertisement
in: Characters, Animals, South American Animals,
and 85 more

A huge, iconic eagle of the rainforests of Central and South America, the harpy eagle (Harpia harpyja) is one of the largest and most powerful birds of prey in the world. This impressive species is named after the ‘harpies’ of Greek mythology, which were winged monsters with sharp claws and a woman’s face. The harpy eagle has a long tail and broad, rounded wings that can span up to two metres across. As in many other forest raptors, its wings are relatively small for its size, giving the harpy eagle great agility and enabling it to dodge through branches and trees while flying below the forest canopy. The harpy eagle’s large black bill is strongly hooked, and its legs and toes are large and robust, with massive talons. Together with its great size, these imposing weapons make the harpy eagle a formidable predator. The adult harpy eagle has blackish upperparts, a grey head and neck, and a distinctive dark, double-pointed crest, which is usually raised. The feathers of the face form a facial ‘disc’. The underparts of the harpy eagle are white, with a broad black band across the chest and black barring on the thighs. The tail is black with three greyish bands and a greyish-white tip, while the undersides of the wings are barred black and white. The harpy eagle has greyish to brown eyes, a black cere and yellow legs and feet. The male and female harpy eagle are similar in appearance, although the female is significantly larger, weighing up to twice as much as the male. Juveniles are whitish to grey overall, with a whitish crest, brownish-grey upperparts and several dark bars on the tail. The young bird gradually becomes darker with age until acquiring its full adult plumage at about four years old. The harpy eagle’s call is a plaintive, penetrating scream, described as ‘wheeeeeeee’ or ‘wheeeeoooooo’, which is repeated several times. Juvenile harpy eagles which are still dependent on the adults can often be observed begging for food by raising their wings in a shrug-like movement, while repeating a high-pitched ‘whee-e-e-e, whee-e-e-e’. Despite this eagle’s enormous size, it is a surprisingly inconspicuous species and is usually only seen when it crosses rivers or forest openings. The harpy eagle is the national bird of Panama. 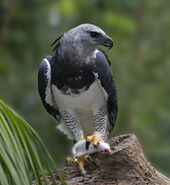 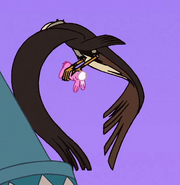 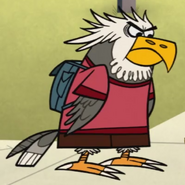