The Parody Wiki
Register
Don't have an account?
Sign In
Advertisement
in: Characters, Animals, African Animals,
and 38 more

This large, high-shouldered antelope (Alcelaphus buselaphus) is one of the grazing mammals that formerly ranged in huge herds, shaping the vast grasslands of sub-Saharan Africa. The hartebeest has long legs, a short neck, long, narrow face and long, pointed ears. Despite being a little ungainly in appearance, the hartebeest is actually a nimble and fast runner, capable of reaching speeds of 70 kilometres per hour. Its short coat varies considerably in colour, from red, black or tan to golden brown, and its tail has long dark brown to black hairs on the outer surface. Both the male and female have horns that are set close together at the base, curve slightly forward and outwards and then point back inwards. The bottom two-thirds of the horns have distinctive rings and those of the female are more slender. The taxonomy of the hartebeest is somewhat complex, with several livingsubspecies, all of which are more or less separated by their distribution, horn structure and coat colour. 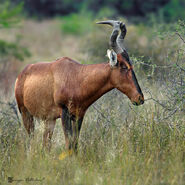 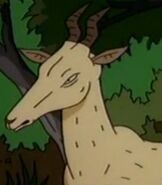