The Parody Wiki
Register
Don't have an account?
Sign In
Advertisement
in: Harvey Beaks characters, Birds, Blue Characters,
and 16 more

Harvey Beaks (born January 12, 2006) is a main characters of the Nickelodeon show of the same name.

A retired detective which he was supposedly assigned the case of the mysterious death of Danny Finch (portrayed by Ray Ray Lee) which later remains unsolved and became colsld case as years go by. He will be seen Danny's ghost in the last scene [which at the time he was been portrayed by Jacob Scribbles (from Wunschpunsch)].

He also made a V.I.P. (Parody only) special choreo for the song No Tears Left To Cry (to honour his 2 bestest friend Fee and Foo (the Imp twins)), where it will be unlocked via code and exclusively thru Just Dance Unlimited.

His appearance was still the same, and he's wearing orange juice glove.

As the routine starts, we can be see him sitting on a swing in Littlebark Playground, holding some of his picture with Fee and Foo playing besides him. Before the song starts, he gently said "This is for you, my two bestest friends in the world" (referring to the twins), and as the song starts, the Littlebark Playground background changes into a throwback of episodes where Harvey, Fee, and Foo take their adventures together in the past. As the chorus starts to play, the scenery became more darker (as it is signifies that it is already evening) and the fireflies appeared on-screen while he's continues to dance, when returning to the line "I pickin' it up", the background became bright again. As the bridge starts to play, Harvey drove in tears (which it was turned into rainbow when he's rubbing it up (happened to be a gold move). When the whole song was finished, the background reverts back into its regular state, while Harvey returns to the swing and continues to swing around, while the scenery was later covered by fireflies as it was signifies that the routine was done. 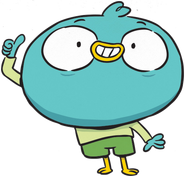 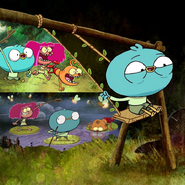 The Special V.I.P. Square for the song No Tears Left To Cry. 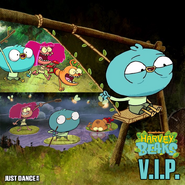 Teaser for No Tears Left to Cry (V.I.P. Mode) 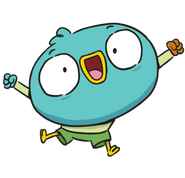