Heather Hogwash (黒羽競子 Kuroha Keiko) is the class representative who is Karin Kokubu's rival and the sole daughter of a wealthy businessman that owns a huge enterprise called the Kuroha Group. She has a crush on Takuma Mushanokoji and always thinks that Karin is trying to steal him from her. She is not welcomed by the other girls in her class due to her arrogance, gossipy ways, talks about her wealth, and going into the affairs of other students. While her parents are always away, Keiko's only companions are a pet alligator and a pet octopus. She knows how to control the air as seen in one episode where she operated a hot air balloon as well as operated an airship in the last episode.

Heather played Aoi Futaba in You're Under Arrest (Chris1986 Style) 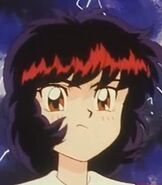 Add a photo to this gallery
Retrieved from "https://parody.fandom.com/wiki/Heather_Hogwarsh?oldid=1007710"
Community content is available under CC-BY-SA unless otherwise noted.