Hector's dolphin (Cephalorhynchus hectori), one of the rarest and smallest of marine dolphins, has a short, stocky torpedo-shaped body, which becomes narrow towards the tail. There is no discernible beak. The sides and back are light grey, there is a darker stripe along the middle, and the underside is white. The large tail flukes, flippers and characteristically rounded dorsal fin are all black. A black marking extends from the snout back around the eye reaching to the flipper. Males and females are similar in appearance, but females tend to be slightly longer than males. Calves have the same markings as adults, but foetal folds visible as pale lines on darker areas can also be seen on individuals less than six months old. The common name of this dolphin refers to the New Zealand scientist Sir James Hector, who first examined the species. 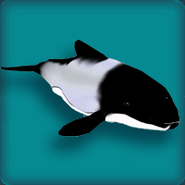 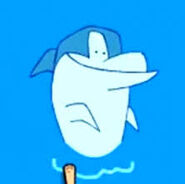 Add a photo to this gallery
Retrieved from "https://parody.fandom.com/wiki/Hector%27s_Dolphin?oldid=2051453"
Community content is available under CC-BY-SA unless otherwise noted.