The Parody Wiki
Register
Don't have an account?
Sign In
Advertisement
in: Main Characters, Arnold and his classmates, Arnold’s Friends,
and 61 more

Helga G. Pataki is the tritagonist, as well as the overall main antagonist and bully-protagonist, but sometimes an anti-hero in the Nickelodeon animated television series Hey Arnold!. She was also serves as the deuteragonist of the 2017 TV film Hey Arnold!: The Jungle Movie. She is only pretends to hate Arnold, but normally loves him. She is Arnold's arch-rival yet love interest, later girlfriend.

She is voiced by Francesca Marie Smith in series and movies.

Helga in the TV Series 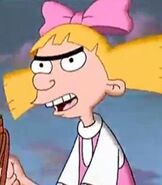 Helga in Hey Aronld! The Movie