The Parody Wiki
Register
Don't have an account?
Sign In
Advertisement
in: Villains, Reformed characters, Leaders,
and 16 more

Hellen Gravely is the owner of the hotel The Last Resort and the secondary antagonist of Luigi's Mansion 3, delighted to work under King Boo's command, free once again thanks to her help, to carry out his evil plan.

She is also the main reason why the events of the third game take place, which also occur inside her hotel.

Hellen Gravely is a heavy makeup person, and players can relate to that statement as in the beginning when Luigi arrived with everyone; Hellen was still powdering her face. She wears a long blue dress and a feather scarf. Her hair is styled in an imposing bun.

Hellen's personality is a bit hard to tell. She is depicted as a chic lady concealing her true appearance with lots of makeup. She is very daring as she unleashed the one and only; King Boo.

A ghost who idolized King Boo, Hellen Gravely freed him from his painting after his most recent loss to Luigi. Hellen wanted to help him getting revenge on Luigi, Mario, and all their friends, and did so by sending Luigi a letter that he was invited to the Last Resort, Hellen's own hotel, telling him to invite any friends and family. Naturally, Luigi fell for the trap and called Mario, Princess Peach, and three Toads to come with him to the Last Resort. Gravely, some Goobs, Steward, and Chambrea all disguise themselves so Luigi and his friends don't realize it's a trap. E. Gadd was also invited (apparently, Hellen lied to him that they had a massive ghost collection), but was captured, making sure Luigi had no weapon to defend himself with.

After night fell, Hellen and King Boo put their plan into action. They captured Mario, Peach, and the three Toads, and when Luigi investigated their disappearance, he was greeted by both at the RIP Suites. As King Boo was ready to put Luigi in the painting, Gravely stood there confident, hoping the plumber would accept his fate. She, however, made a miscalculation: Luigi was a coward. Rather than try to fight back, Luigi ran away and escaped to a laundry room via a chute, getting King Boo frustrated. After Luigi acquired the Poltergust G-00 and saved E. Gadd, the two went to work on saving their friends one by one, sucking up all the ghosts they saw.

To halt their progress, Hellen made sure the elevator buttons floated to their respective places (in case Luigi got smart and tried to put one on the 15th floor). She also sent her precious pet Polterkitty to steal said elevator buttons, but failed twice, with the second time resulting in Luigi slamming it into the ground and capturing it, infuriating Hellen. King Boo, fed up her incompetence, took both Mario's and Peach's paintings, putting the Mario painting in the Main Observation Room where Hellen resided, and the Peach at the roof. When Luigi finally got to the Master Suite, Hellen sent him a recording to mock him and dared him to save Mario, hoping to kill him and regain King Boo's trust. As Luigi continued exploring the Master Suites and getting the four keys needed to access Hellen's chamber, he became increasingly disturbed by all the items in the suite which Gravely fashioned in King Boo's likeness. Even the gems were shaped after him!

Luigi eventually got to the Main Observation Room, where Gravely awaited him. She angrily scolded the plumber for running away like a coward and not accepting his fate, saying that had he just let himself get trapped in his painting, King Boo would have "showered her with praise" for her deed. Instead, she lost everything: her staff, her precious Polterkitty, and the very little respect King Boo had for her. She got so furious that she unintentionally revealed her true form, which was rather ugly, forcing her to again put on her makeup. She fought Luigi in battle, but thanks to Luigi's gooey counterpart, Gooigi, she was defeated and captured, where she was reunited with her Polterkitty. With her defeat, Luigi was able to rescue Mario, and the two brothers made their way to the roof to rescue Peach.

After King Boo's defeat, he was put in a container right next to Hellen, who fawned over him.

The boss fight starts off with Hellen hiding off-screen, only being seen via her monitors. Eventually, she will set off a spinning laser trap that can be dodged by Luigi using his burst. In the arena are two grates that Gooigi can phase through. Below the main battle, the floor is four colored switches that Gooigi can hit or pull to disable the corresponding laser on the main battle arena.

Hellen is immune to the flashlight up until she attempts to whack Luigi with her mirror. If Hellen misses her attack, her mirror will get stuck in the floor and is attempting to get it free. During that time she is vulnerable to light, thus giving Luigi an attempt for an attack on the evil hotel owner.

Between each phase, Gravely will lose her makeup and she will reapply every time she is on her monitors.

During the fight Hellen can reactivate the colored lasers in the arena, and also release water on the level below, perishing Gooigi if it touches him. 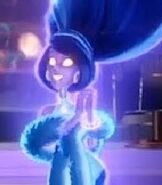