The film follows the adventures of three children: a skateboarding mischief-maker named Jimmy, his sweet little sister, Agnes, and their cousin Ralphie, a cautious, intelligent and overweight genetics prodigy. When their babysitter, Aunt Martha, falls asleep, the three children sneak off to go fishing only to stumble across the boathouse home of Professor Flint Lockwood, an eccentric marine biologist. Reasoning that climate change could melt the polar icecaps within the next century, Flint has developed a potion that turns people into Sea Creatures so they can survive the rising sea level and also an antidote to reverse the process. Unbeknownst to all, Agnes drinks the potion mistaking it for lemonade, and painfully transformed into a pink angelfish and gets tossed out of the window into the sea. Since Agnes' transformation was caught on camera, the tragedy is immediately discovered, so Jimmy, Ralphie and Flint head out onto the ocean in a desperate search. When a storm blows in, Jimmy recognizes the futility of their search, drinks the potion and jumps overboard, becoming a sea turtle. The boat capsizes and, because Ralphie cannot swim, he's forced to drink the potion to survive, becoming a beluga whale. The Professor, the boat and all of its contents sink beneath the waves.

A Tiger Shark and a plankton animal come across the leaking bottle of antidote and gain the human characteristics of speech by inhaling the liquid. Using his newfound gifts, the plankton animal, who now calls himself Sheldon J. Plankton, sets about creating an underwater civilization of intelligent sea creatures. They take residence in a sunken oil tanker and begin to transform it into a monument. Jimmy, Ralphie and Agnes are reunited, along with a bottlenose dolphin named Leena, but are horrified to discover that the antidote has been lost. If they don't find it before tomorrow's sunset, they will stay sea creatures forever. Some traveling sea creatures tell them about Sheldon and his "magical potion". Thinking it must be the antidote they are looking for, the children travel to Sheldon's oil tanker empire. At the tanker, Jimmy attempts to steal and drink the bottle of antidote, but is warned by Ralphie that if they turn back into humans this far beneath the ocean, they'll die. Intrigued by this, Sheldon has the children arrested and demands they manufacture more of the antidote or he'll have them eaten by the Shark.

Meanwhile, Jimmy and Agnes' parents, Judy and Hugh, arrive home to find Aunt Martha frantic with worry. They find that Jimmy's fishing equipment is gone, so they head to the beach to search. There, they meet Professor Flint Lockwood who, having survived the storm, explains that their children have been turned into sea creatures. Though the parents are skeptical at first, a showing of the video recording from earlier validates his story. He and Hugh head out to search for the children in a cobbled-together ship fitted with a large water pump.

The next morning, the children manage to escape with the help of Leena. With no chance of going back to retrieve the bottle of antidote, they decide that their best hope is to find the ingredients to recreate the antidote themselves. Just as they complete the formula, they are found by Sheldon, the Shark and their army of Guard Stingrays. During the standoff, Sheldon and the Shark get into a heated argument as Sheldon imbibes more of the potion, developing hands and growing in size. Taking this opportunity to escape, the children are stopped by the leader of the Guard Stingrays who attacks Jimmy striking him with his tail, then drinks the antidote himself, growing in size and developing hands and feet. Just as the new "King Stingray" and his army are about to capture the children yet again, a tremendous underwater twister, generated by the Professor's water pump ship, sucks all the Guard Stingrays (and the Shark, who eats the King Stingray in the middle of the twister) to the surface. The Shark remains stuck in the tube.

Now alone, with Jimmy dying, and only twelve minutes until sundown, Ralphie realizes their last hope is to make it back to the Professor's lab, where a whole jug of antidote is stored. Showing unexpected courage and determination, Ralphie carries both Jimmy and Agnes through the dangerous seawater intake pipes back to the lab. However, they are pursued by Sheldon, who overpowers them and steals the antidote. While Ralphie fights off the Professor's escaped piranhas, Jimmy manages to catch up to the fleeing Sheldon as he escapes into a water intake pipe and tricks him into drinking enough antidote to become mostly human by asking him various questions on science. After drinking some of the antidote to answer the questions correctly, Sheldon becomes near-human, but now he can no longer hold his breath for a long time; thus he drowns.

Jimmy drags the jug of antidote back to the lab and collapses. Ralphie uncorks the jug just as Judy and Aunt Martha open the door to the laboratory, causing everyone to get swept away. As the water drains away, Ralphie and Agnes have become human once more and are reunited with their parents. After a few tense moments in which a stuffed sea turtle is mistaken for the limp body of Jimmy, the human Jimmy emerges from one of the lab's pipes (with a broken leg). Later on, while playing by the beach, Agnes is reunited with Leena, who is turned into an actual horse by the Professor and Ralphie. We zoom out to see the beach with Agnes riding Leena in horse form as the film ends. 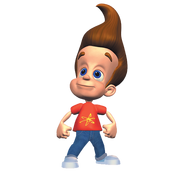 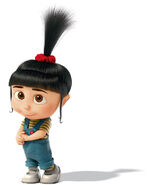 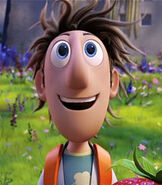 Troy as the Shark 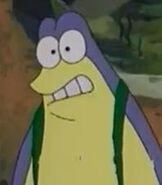 Stingo as the Crab

Squidward Tentacles as the Bus Driver
Community content is available under CC-BY-SA unless otherwise noted.
Advertisement