The Parody Wiki
Register
Don't have an account?
Sign In
Advertisement
in: Marine Reptiles, Characters, Animals,
and 11 more

Henodus chelyops is an extinct placodont of the Late Triassic period during the early Carnian age. Fossils of Henodus chelyops were found in Tübingen, Germany. It was around 1 metre (3.3 ft) in length.

Henodus, like many other placodonts, had a superficial resemblance to a turtle. Like turtles, it had a shell formed from a plastron on the underside and a carapace on top. The carapace extended well beyond the limbs, and was made up of individual plates of bony scutes covered by plates of horn. However, the shell was composed of many more pieces of bone than that of turtles, forming a mosaic pattern. The armor was fused to its spine, and its limbs were situated in normal positions, unlike the turtle, where they are located inside the ribcage. The weak limbs of Henodus suggest it spent little, if any time on land.

Henodus chelyops also had a single tooth on each side of its mouth, though the remaining teeth were replaced by a beak. In addition, it had baleen-like denticles along the jaws, which combined with a unique feature of the hyoid and musculature indicative of rapid jaw closing indicate a filter feeding lifestyle. The head was squared-off at the front, just ahead of the eyes.

More recently, however, it has been suggested that this placodont was an aquatic herbivore, scraping off vegetation from the bottom with its broad jaws. This suggestion has been brought up in a paper discussing the habits and morphology of Atopodentatus, another Mesozoic aquatic reptile formerly suggested to be a filter-feeder and bearing strongly convergent jaw adaptations, including a similar "hammerhead" jaw tips, though unlike Atopodentatus it's still believed that Henodus relied on filter feeding to obtain plant-matter from the substrates.

Henodus is the only placodont thus far found in non-marine deposits, suggesting it may have lived in brackish or freshwater lagoons. 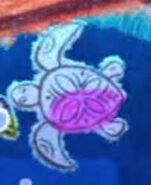 Moana (2016)
Community content is available under CC-BY-SA unless otherwise noted.